Many years have passed since Marie Hasselbom got tired of breaking the ice in her horses’ water troughs every morning. She would then carry heavy buckets of water out to refill them, simply to watch them freeze over again. At the same time, her father-in-law Hjalmar Fries was thinking about the problem. He is a retired civil engineer with a long background in research and product development of, among other things, submersible pumps, stirrers and water treatment technology, and he thought it was unnecessary for Marie to spend her days endlessly breaking ice and carrying buckets of water out to their four horses. 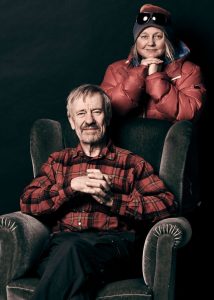 Hjalmar continued to think about the problem while Marie searched the market high and low for a solution. She found electrically heated water cups and heated water pipes dug down deep into the ground, but neither of these were solutions suitable for the horses in the paddock behind her house. {0Marie and Hjälmar talked with countless horse owners and veterinarians and after finding nothing suitable they decided to construct their own heated trough. Their first priority was to make sure their combination of horses, water and electricity was totally safe – the answer here was to use a transformer outside the horses’ enclosure and only low-voltage electricity in the cables in the enclosure. After a bit of time, their first prototype was ready – an electrically heated water trough that was manually refilled.

Once it was put out in the paddock, it wasn’t only Marie’s horses that liked the prototype. Her sister-in-law’s three horses also liked it. In fact, they chose it above the heated water cups that were already in their enclosure.

“We were so pleased when we saw that all the horses preferred to drink from our trough, it only took a couple of days,” says Marie. We learnt from Sara Nyman at SLU, who researches in horses and water, that horses prefer to drink from large volumes of water as they can drink larger amounts in less time. This is not possible from a cup.

“Sarah also explained how important it is that horses drink enough water every day. Horses have a really short memory apparently, which means that if they don’t have the chance to drink when they first feel thirsty, they quickly forget that they are thirsty and won’t drink. And it doesn’t help if a horse is given water later on. If a horse gets dehydrated, it doesn’t take them long to become unwell.

It wasn’t only the horses who took an interest in the new trough, even Marie’s neighbours were asking all about it and before long, Marie and Hjalmar decided to start producing heated water troughs.

“We decided right from the start to prioritise high quality, so it took some time before we were ready to sell any troughs – almost three years.”

Since this, the company has grown quickly and the product development has had a really high tempo. ThermoBar’s latest innovation is automatically refilling troughs for unheated box stalls in stables. Among their customers are Wången and Strömsholm and ThermoBar’s products are sold in Norway, Finland, Germany, Austria, and Switzerland. Everyday, Marie makes use of her equine training from Strömsholm, photography studies at RMI-Berghs and her international studies in marketing and sales.

Today, ThermoBar is based in Åre, northern Sweden, where Marie now lives with her family. She is constantly testing new prototypes in her backyard in the cold winter months and this is also where a lot of her new ideas come from.

“The feedback we get from our customers is really important for us, we are always interested in finding out what works well, what could be added to the mix and what could be better,” says Marie. We are still working from a long-term perspective, with high demands on quality and a lot of time is spent testing products in different environments before we release a new product. It is really important to us that customers can rely on ThermoBar’s products delivering what we promise.

You can find out more about which cookies we are using or switch them off in settings.

This website uses cookies so that we can provide you with the best user experience possible. Cookie information is stored in your browser and performs functions such as recognising you when you return to our website and helping our team to understand which sections of the website you find most interesting and useful.

Strictly Necessary Cookie should be enabled at all times so that we can save your preferences for cookie settings.

If you disable this cookie, we will not be able to save your preferences. This means that every time you visit this website you will need to enable or disable cookies again.

This website uses Google Analytics to collect anonymous information such as the number of visitors to the site, and the most popular pages.

Please enable Strictly Necessary Cookies first so that we can save your preferences!